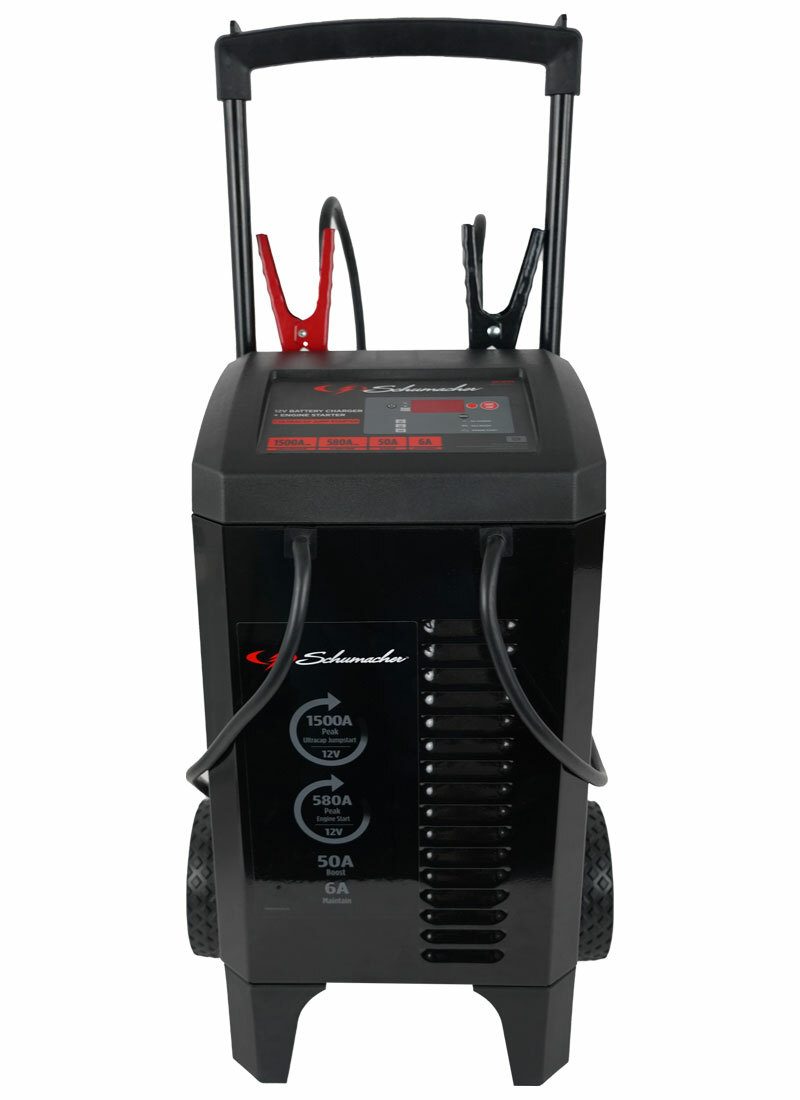 When the professionals need a powerful and reliable wheel-mounted engine starter and battery charger, they turn to Schumacher. Schumacher’s Wheeled 12V Ultracap Battery Charger and Engine Starter is a smart choice, giving users the option of plugging into AC power or using it as a portable jump starter. With innovative ultracap technology and an internal lithium battery, the SC1634 lets users leave the shop to jump a vehicle. Professionals appreciate the unit’s dual ultracap/lithium design, which imparts high power density, quick charging, added cranking power, and superior reliability. Featuring 1500 peak amps for powerful jump starting, the SC1634’s ultracap portable jump starter can be recharged from the internal lithium battery for additional starts.

The cutting-edge ultracap technology utilized in the SC1634 provides formidable advantages over traditional AGM and lithium jump starters. Unlike AGM and lithium jump starters, which are typically are rated for under 1,000 cycles, the SC1534’s ultracaps are rated for more than 10,000 cycles. In addition, ultracaps, unlike lithium batteries, can be fully discharged without damage and can be recharged in a few minutes instead of the two to four hours it takes to recharge a lithium battery. And in extreme conditions, ultracaps outperform lithium and AGM jump starters, providing superior starting at -40°F or 140°F.

When plugged into an AC power source, the Schumacher Wheeled 12V Ultracap Battery Charger and Engine Starter features 580A engine start, 50A boost, and 6A charge. The 50A boost mode raises the voltage and sends a swift burst of energy into the battery for a fast charge that quickly brings deeply discharged batteries back to life.

The Schumacher Wheeled 12V Ultracap Battery Charger and Engine Starter is built to stand up to tough use with a heavy-duty steel case and rugged metal clamps on 6-foot, 4-gauge cables. The unit also features a digital display, LED indicators, and push-button controls, which give the operator easy and accurate control.

When they need a versatile and powerful tool to bring batteries back to life, Pros choose the Schumacher SC1634 Wheeled 12V Ultracap Battery Charger and Engine Starter. 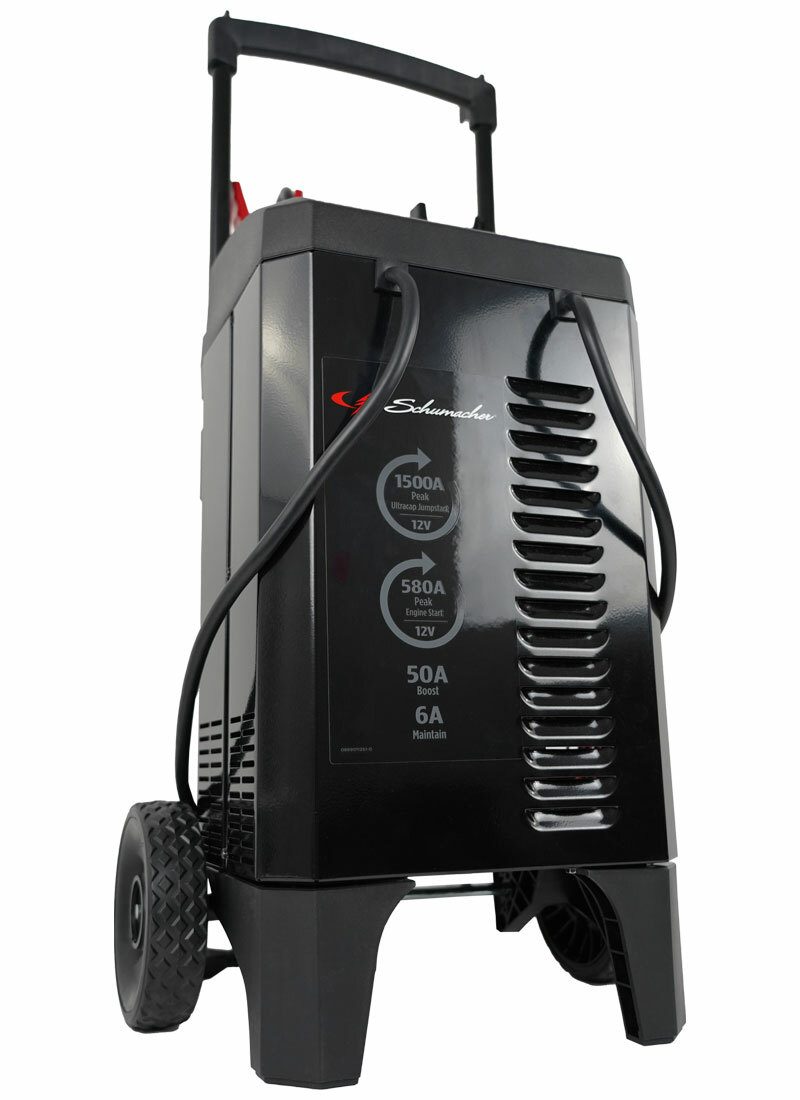 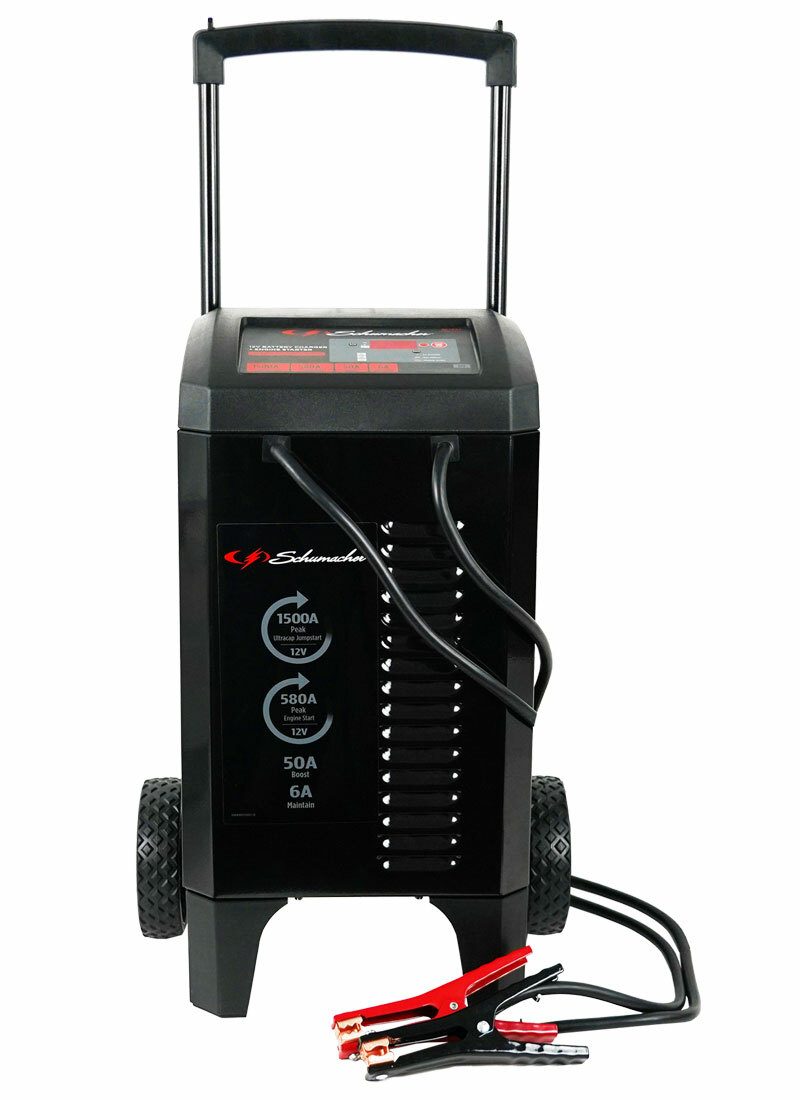 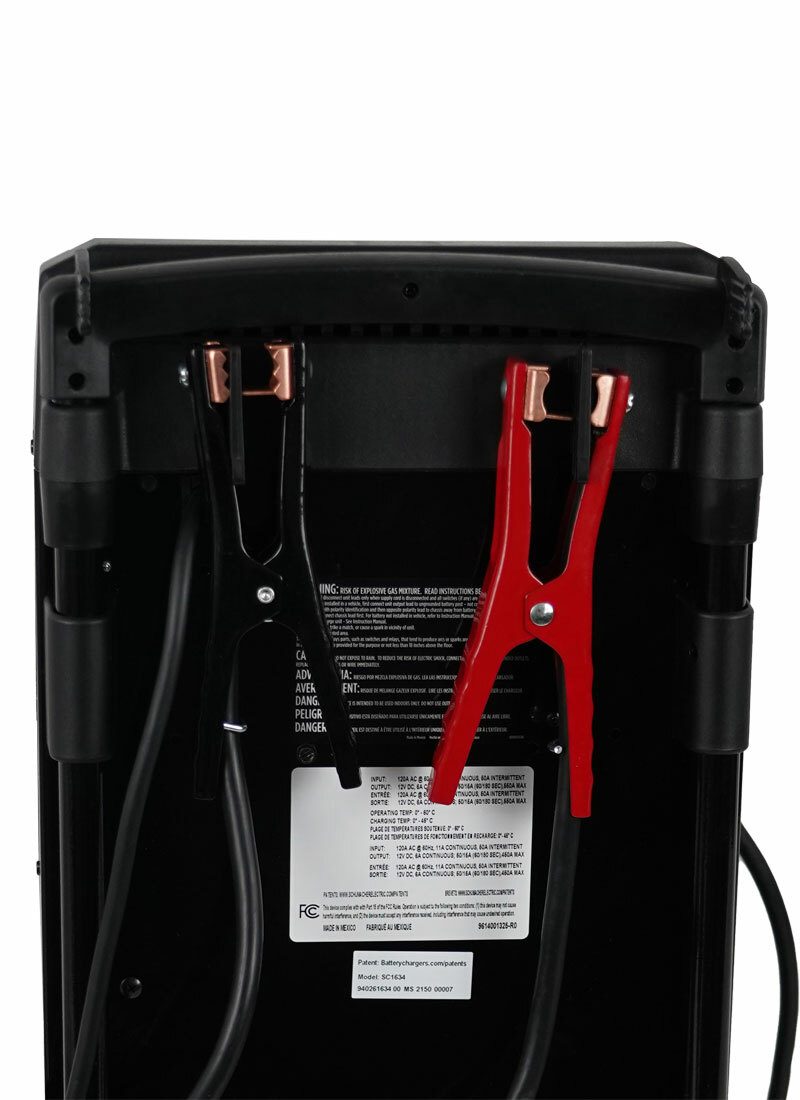 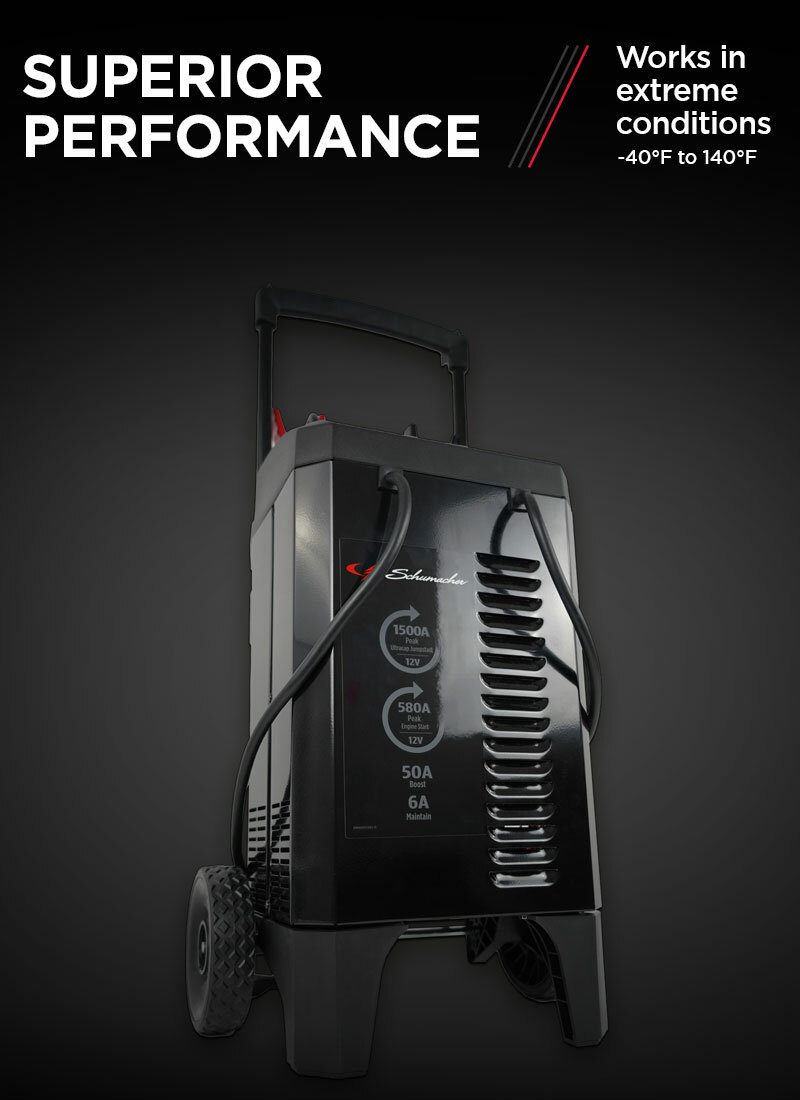 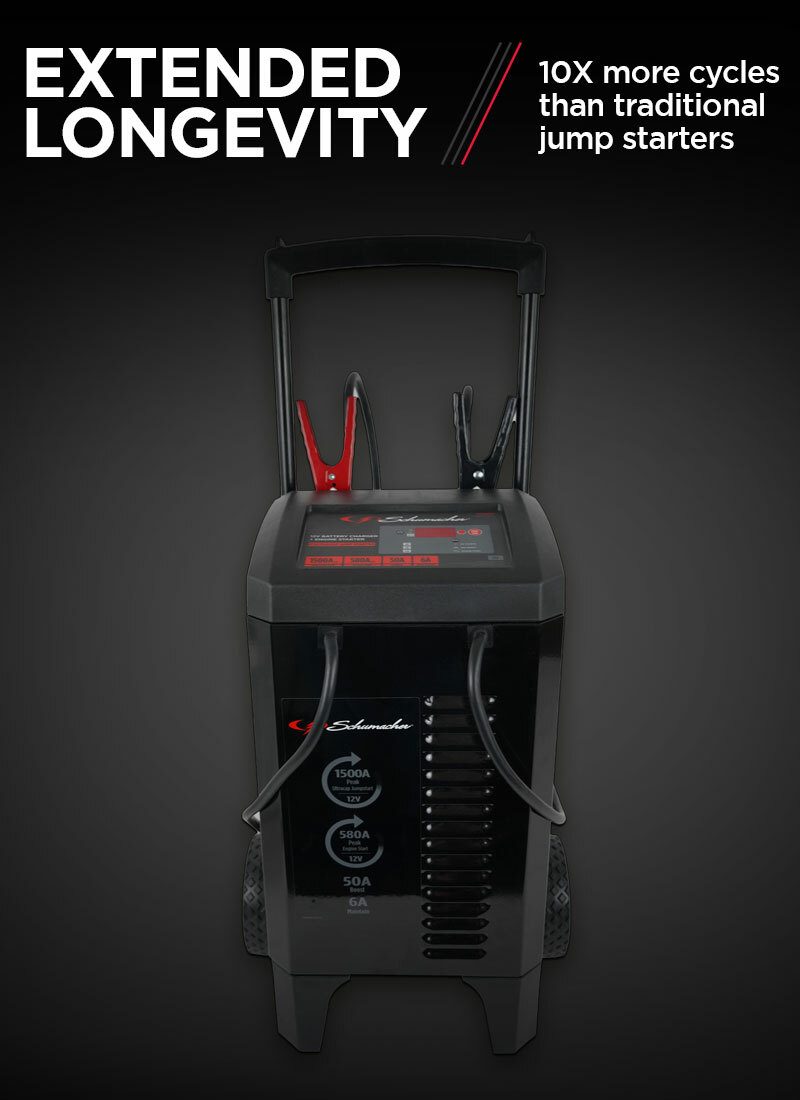 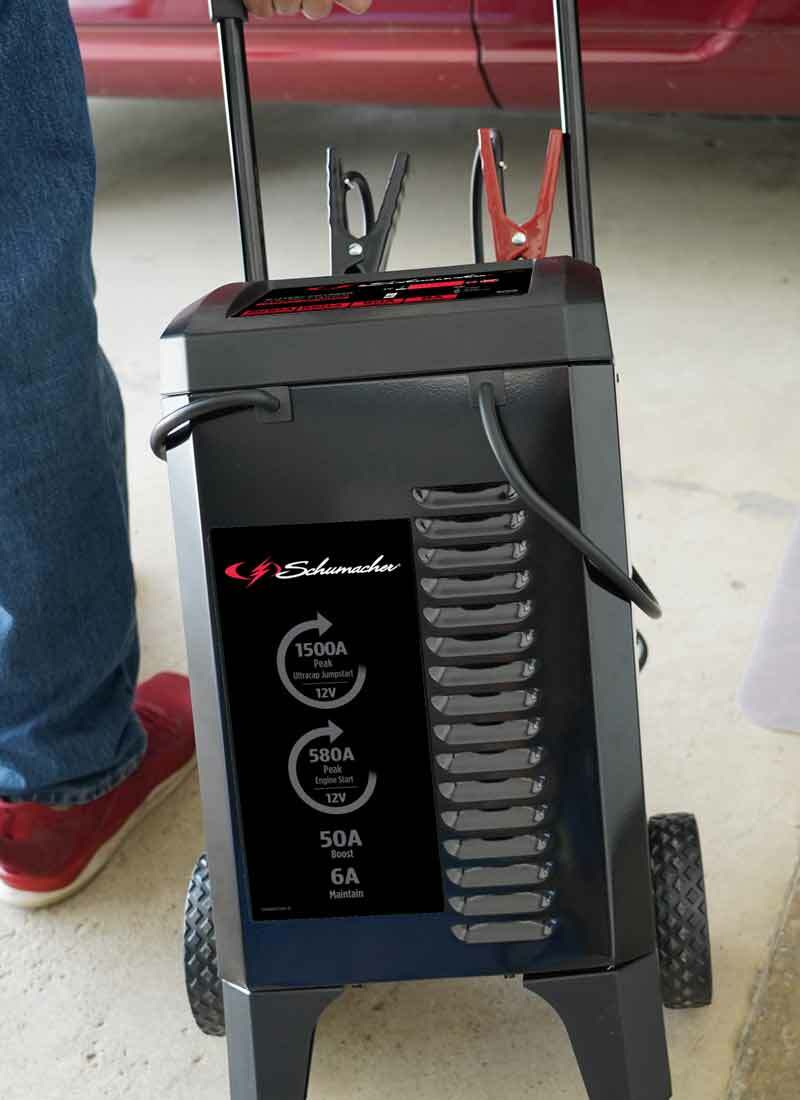 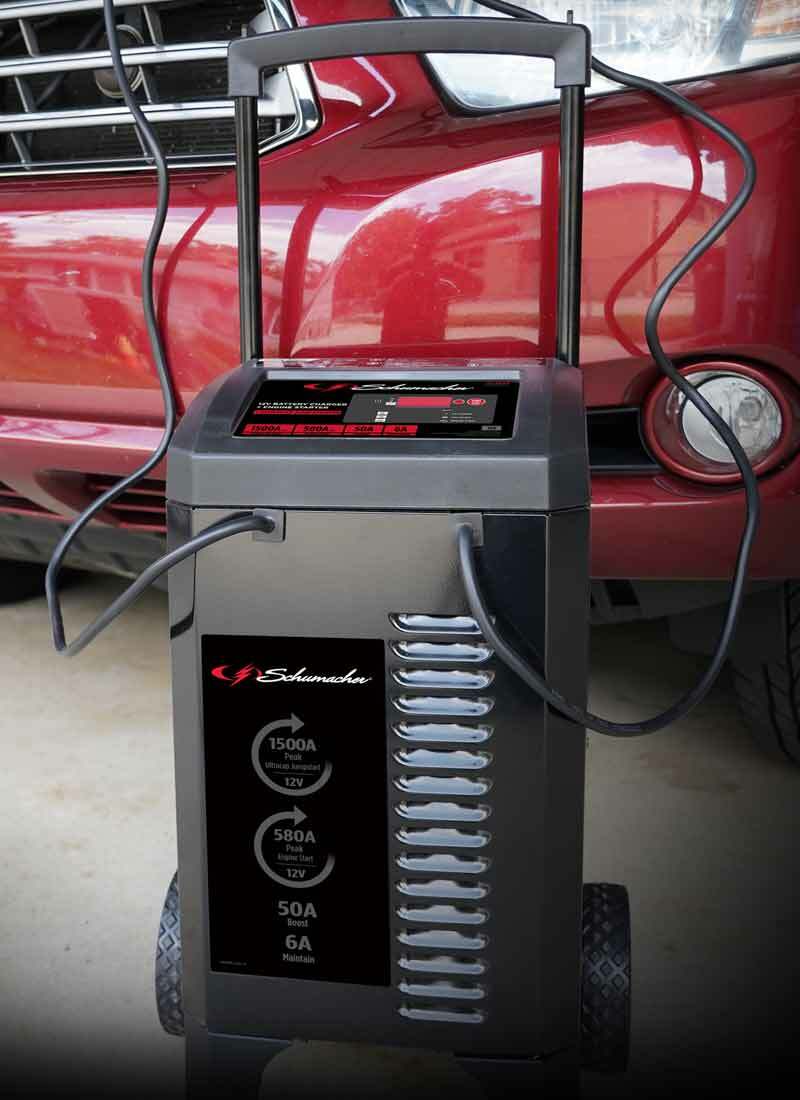